We've noticed you are using Internet Explorer. This is an outdated Web Browser and is not supported by this website. Consider switching to a moden Web Browser like Google Chrome.

Hertsmere Borough Council is the local authority for the Hertsmere non-metropolitan district of England, the United Kingdom. Hertsmere is located in the south of Hertfordshire, in the East of England region.

The Council itself is based in Borehamwood, the largest settlement in the district,. Other towns in the borough include Bushey, Elstree, Radlett and Potters Bar.

The name "Hertsmere" was invented for the new district by combining the common abbreviation of "Hertfordshire" ("Herts") with "mere", an archaic word for boundary. The name is doubly appropriate as the district straddles the historic county boundary between Middlesex and Hertfordshire and forms the administrative boundary between Hertfordshire and Greater London. The name is reflected in the council's coat of arms, which shows a hart upon the battlements of a boundary wall.

The district was awarded borough status by Royal Charter in 1977.

The borough was originally in the Metropolitan Police District, despite being outside the modern Greater London boundaries. It was transferred to Hertfordshire Constabulary in 2000.

Hertsmere is also the location for BBC Elstree, the site of EastEnders, and formerly the home to Top of the Pops, before its move to BBC TV Centre.

The area was also home to other TV and film studios, including MGM, until this was demolished for residential development, and is now an area called Studio Way. 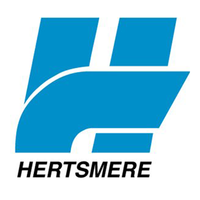